First Meeting of the Executive Council – Day One

Representatives from our regional federations were in attendance, as well as councilors, and attendees from all around the world who tuned in to watch the proceedings on our YouTube channel.

The meeting began with a recitation from the Holy Qur’an by Mu’allim Murtaza Bandali. 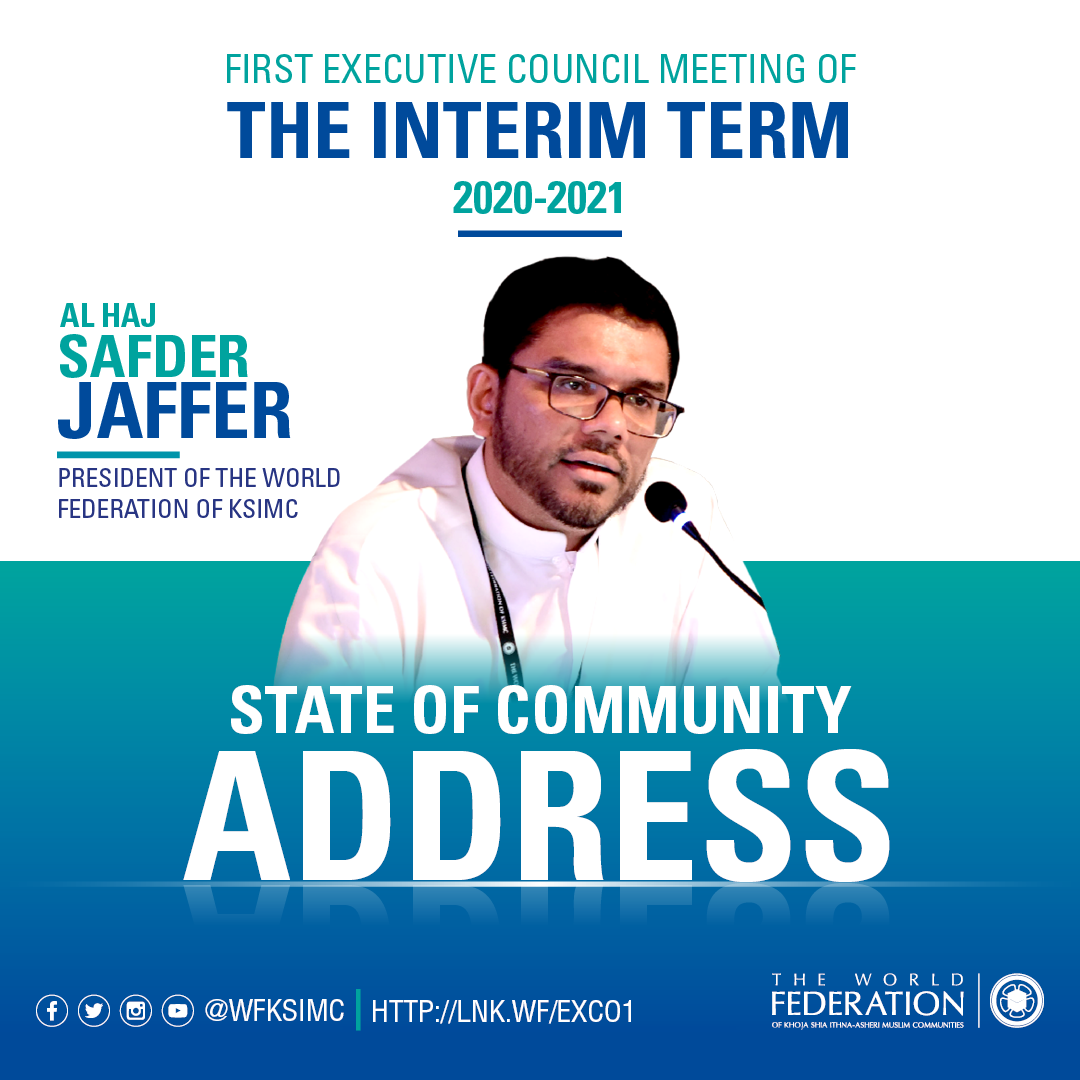 WF President, Al Haj Safder Jaffer, gave an address on the state of the community. He spoke about various topics, such as the magnificent work undertaken by the COVID-19 Task Force. He spoke about the religious advice given during the pandemic and thanked the office of His Eminence in Najaf for their prompt guidance. The President commended the great work done by Ghusl Kafan teams worldwide, particularly noting Pirhai Jamaat in Karachi and Stanmore.

Following on from COVID, the President touched on the importance of encouraging our community members to get vaccinated, and praised KSIMC of Birmingham for their work in providing vaccines to the wider public. He said that WF is working with specialists to assess if the vaccine can be procured for community members in regions where the state does not provide vaccines. He said an advisory team on vaccinations has been established for public support.

The President noted the economic suffering the pandemic has caused in Africa, Pakistan, and India. He said $500,000 USD has been set aside for immediate support and a team of three appointed councilors, Br. Zaheer Abbas Khimji from Africa, Dr. Insiya Agha from Pakistan, and Br Ali Hasnain Dosani from India, have been assigned the task to work closely with the regional federations to disburse these funds to those most in need as soon as possible.

Moving onto other topics, the President spoke about the successful completion of the MCE digitisation project via the MCE portal, which will be spoken about more later on. He spoke about the online Hawza, which is to be launched shortly with encouragement and supporting letter provided by the office of His Eminence, and about his recent trip to Najaf in December with Dr. Shaykh Murtadha Alidina.

He concluded by thanking the regional federations, WF volunteers, OBs, and Staff for their excellent support in continuing the activities of The World Federation globally. You can watch Al Haj Safder Jaffer’s speech in full here.

As well as his address, a video was played, which showed the Office Bearer team reflecting on their time in office so far. You can watch this video here.

A video update from the COVID Task Force was played, featuring Dr. Mithani, the Task Force Lead, which talked through the 7 work streams and the progress made within each one;

You can watch the video here and read more about our COVID appeal here.

Dr. Mithani, who chaired the Independent Award Panel, presented the Award for Outstanding Jamaat – Dealing with COVID-19 (Burial & Medical) for a large and small jamaat. The winners were MKSI Leicester for the small jamaat, and Khoja Pirhai Jamaat (KPSIAJ) for the large jamaat. You can watch this here. 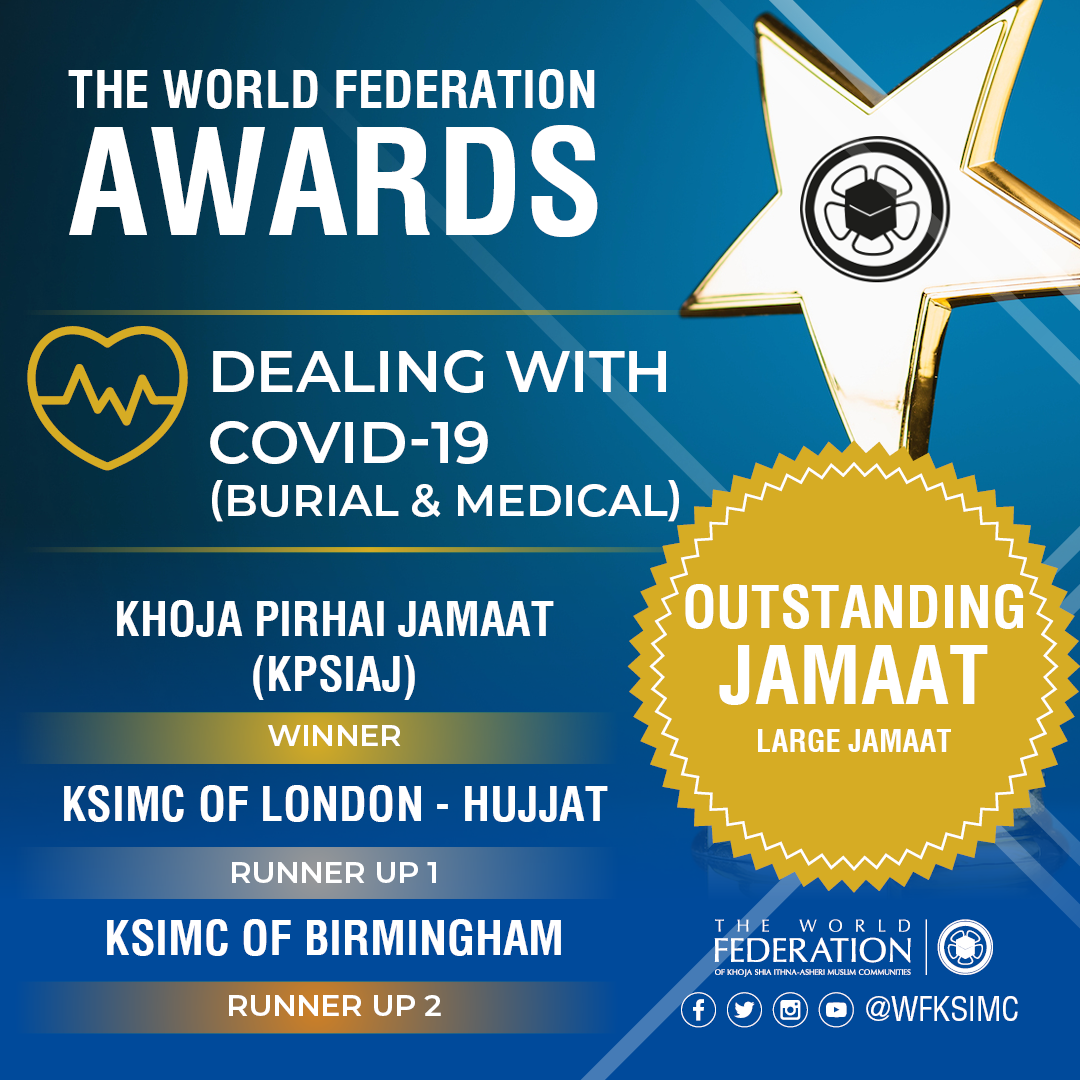 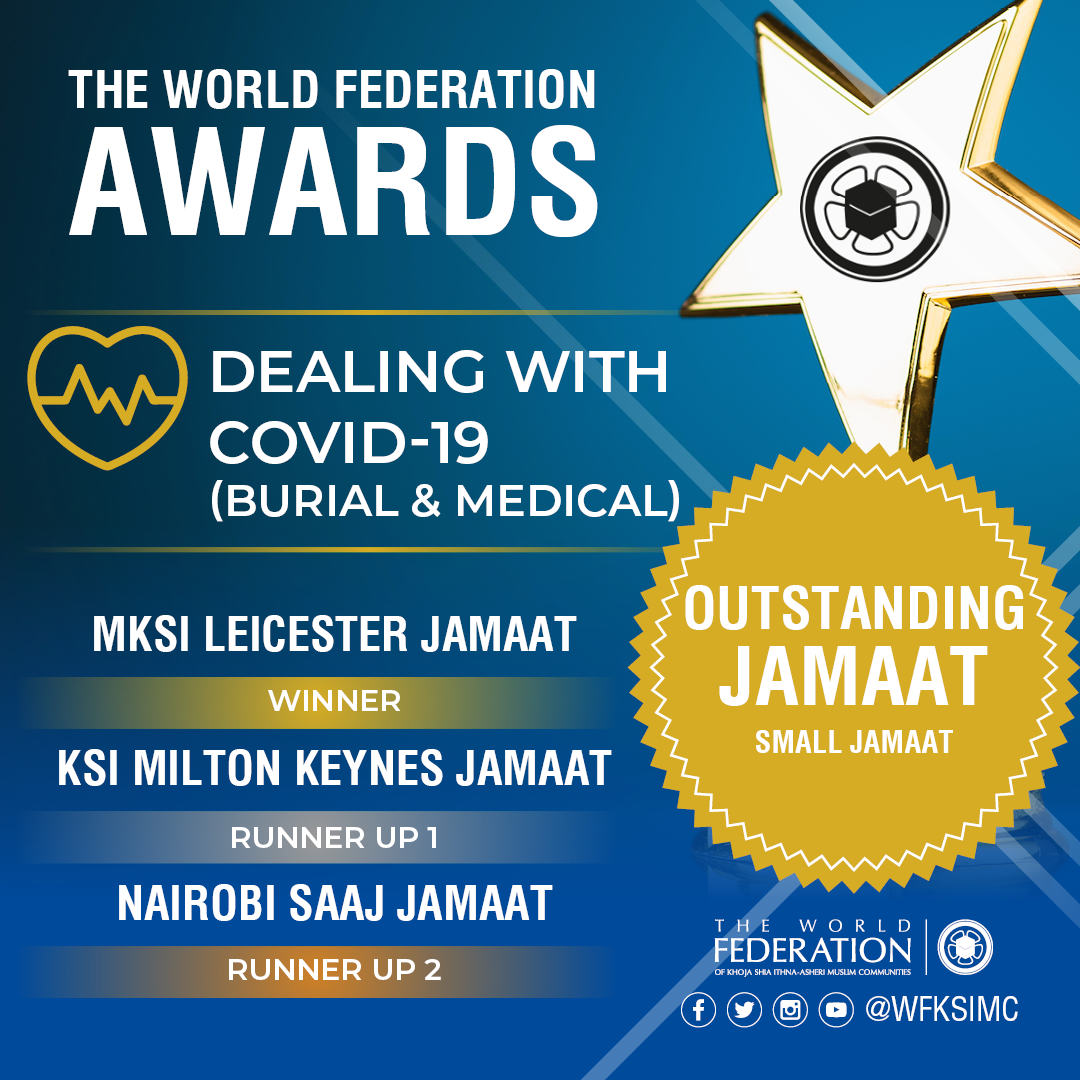 Following a break, the meeting reconvened with a video and presentation from the Head of MCE, Naushad Mehrali. The video, which you can watch here, talked about the projects they have been working on in the past year and the milestones reached, including the digitisation of the curriculum and the launch of the Tarbiyah Storytime App. This was followed by observations from the delegates.

Dr. Mithani also presented the second award of the day, the Award for Outstanding Jamaat – Digital Delivery for a large and small jamaat. The winners were New York Jamaat (SIJNY) for the small jamaat, and ISIJ of Toronto for the large jamaat. You can watch this here. 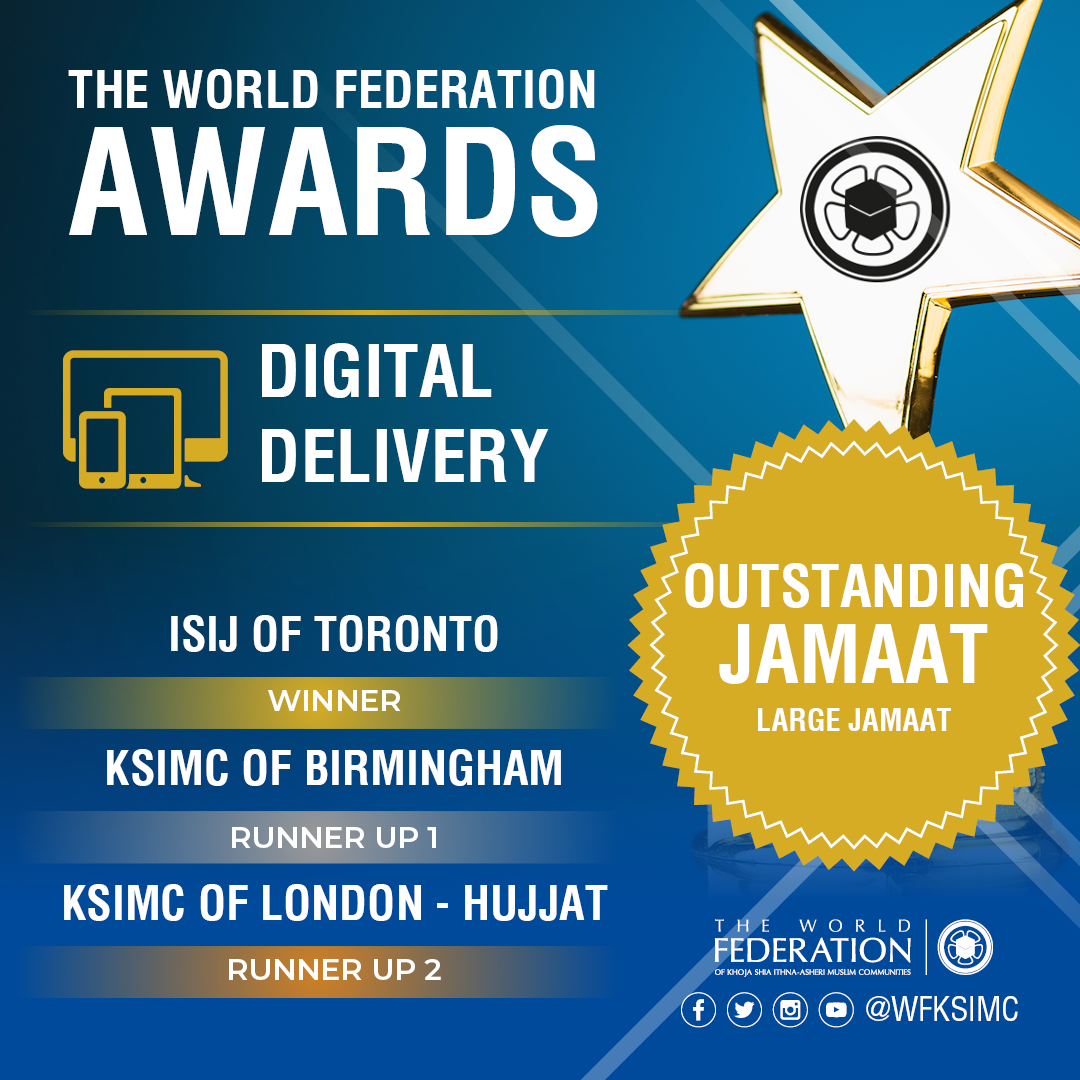 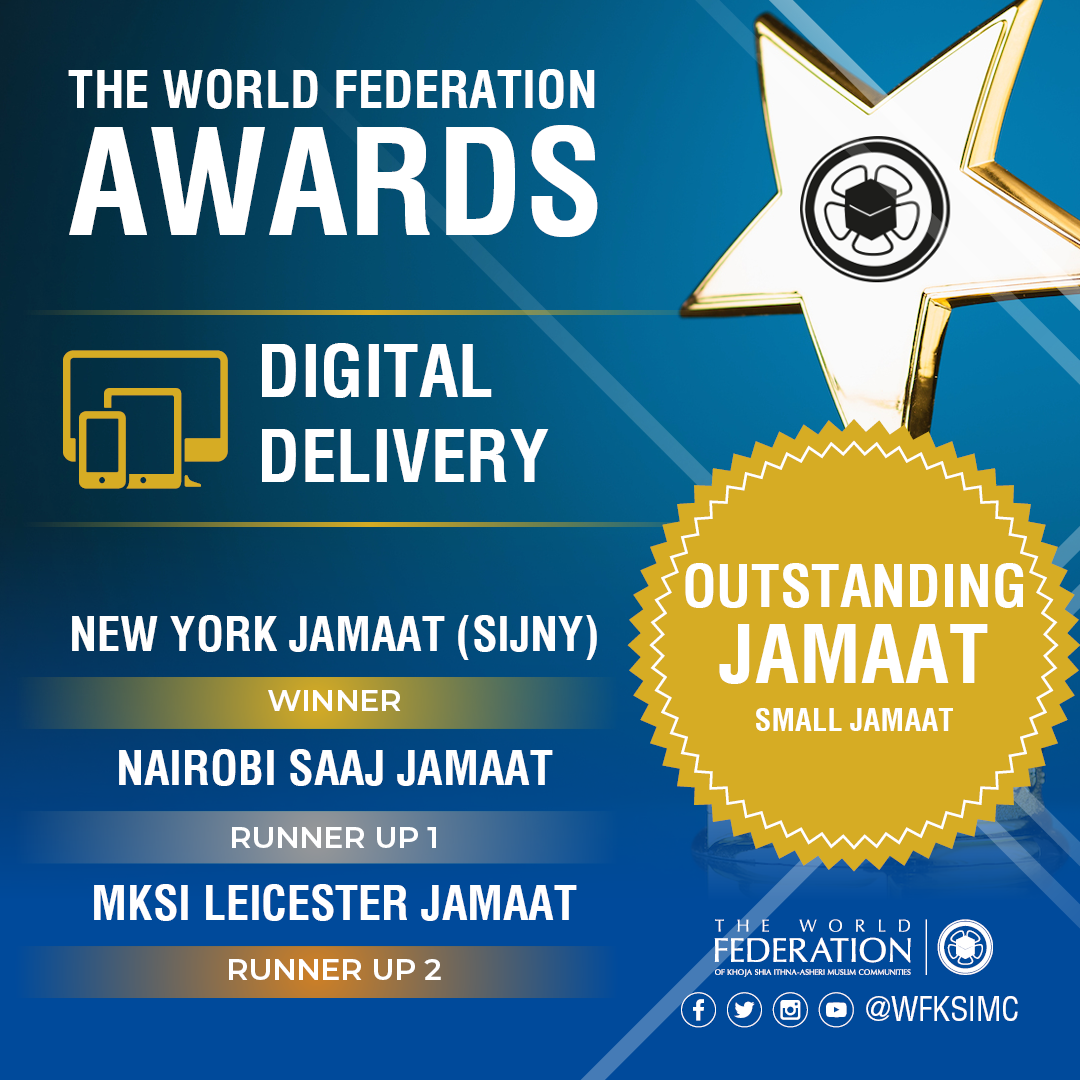 After the awards, the WF-AID video was shown to the delegates, which talked about the projects worked on and completed in the last year, including the installation of water solutions as part of the Ali Asghar Water Appeal, the distribution of winter essentials as part of the Winter Appeal, and the business and microfinance support to families across Pakistan and parts of Africa. You can watch this video here.

The Khoja Heritage Project, which works to preserve our heritage, presented a video update on their work over the past twelve months including the reading circle, and the trip to India in January 2020, which you can watch here.

The second last item of the agenda for the first day was an update from Al Haj Safder Jaffer on the legal situation and the next steps the organisation is taking. You can watch this here.

A video update for the Zainabiya Child Sponsorship Scheme was shown during a break, which talked about the project and the impact it’s had on the lives of thousands of children from impoverished families. Watch the full video here.

On the Agenda Tomorrow

This ExCo meeting will continue tomorrow, 24th January 2021, where we will have a presentation and video from Islamic Education, an update from the Treasury, as well as some more awards, and planning for the Sixteenth Ordinary Conference.

Join us tomorrow, live on our YouTube channel at:

The Khoja Heritage Tour is Back!

Call For Papers at the International Conference: “Intellect and Revelation: Relations and Ijtihadi Implications.”