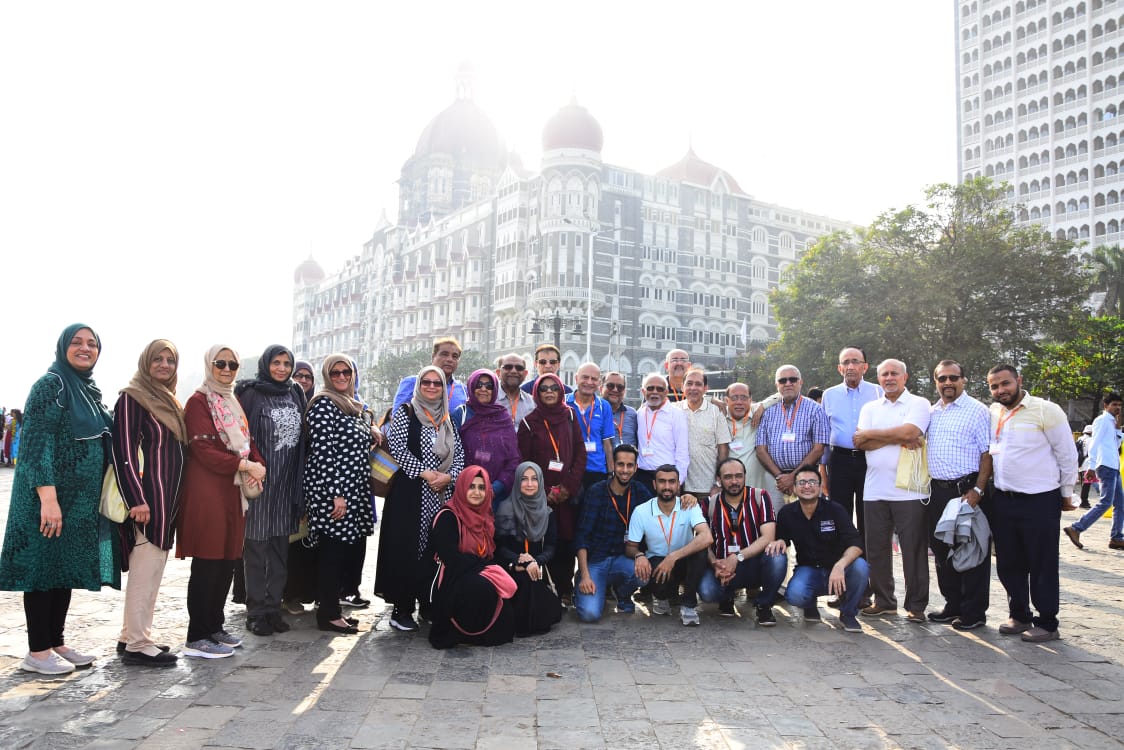 Our tour kicked off with a trip to the Mulla Qadar Mehfil, the epicentre of the KSI movement in late 19th century. As we began the tour, the group were buzzing with an unparalleled sense of excitement as they looked forward to the prospect of reconnecting with their roots. The common shared heritage made it extremely easy for bonds to be made between the newly aquatinted group.

Following the opening ceremony where the objectives of the trip were outlined, we then spent time looking at Mulla Qadar’s illustrious career. The spreading of new knowledge inculcated a sense of enthusiasm as the participants started conversing with each other. Our group constituted of a diverse range of people from all geographies. Despite the majority of the participants being seniors, the managing committee contained many young faces.

As we walked upon the roads our ancestors would have trodden upon, we embraced the buzz that was generated from the trade that was occurring down the narrow street of Khoja Mohalla. The walk also provided the participants with time to digest the great volumes of information they had received earlier that day.

This trip marked the first time that we visited the Khoja Sunni Jamaat, where Hasnain Bhai Walji briefly explained their beliefs. From here we went to the Khoja Ismaili Jamaat Khana and then finally the Khoja Shia Ithna’Asheri Masjid known as the Dongri Masjid.

A breathtaking view at the Gateway of India

Following Namaaz and lunch, the weather was perfect for a boat ride at the Gateway of India; a monument which was erected in honour of King George V. The steely blue water coupled with the beautiful sunset proved to be a perfect combination for a boat ride. The traditional Indian food followed by a Baraza chat over chai allowed us to wind down in a relaxing manner.

Getting an insight into the life of Mahatma Gandhi

We began our day by visiting the Mani Bhavan Sanghralaya, a museum with all the artificers that Mahatma Gandhi owned whilst he was in Mumbai. The museum gave us a detailed account of his childhood, family life and his participation in cultural and social activities. We also looked extensively into his stories about struggling for freedom.

Paying respects to our ancestors at the Khoja Kabrastan

We then proceeded to Kabrastan where the participants were avidly trying to find the graves of their ancestors with the help of locals. Hasnain Bhai Khaku recited an amazing munajaat which was followed up with by speeches by Asad Bhai Virani and Dr. Sadiq Uttanwala. These alluded to the sacrifices made by our ancestors for the purpose of spreading our religion. 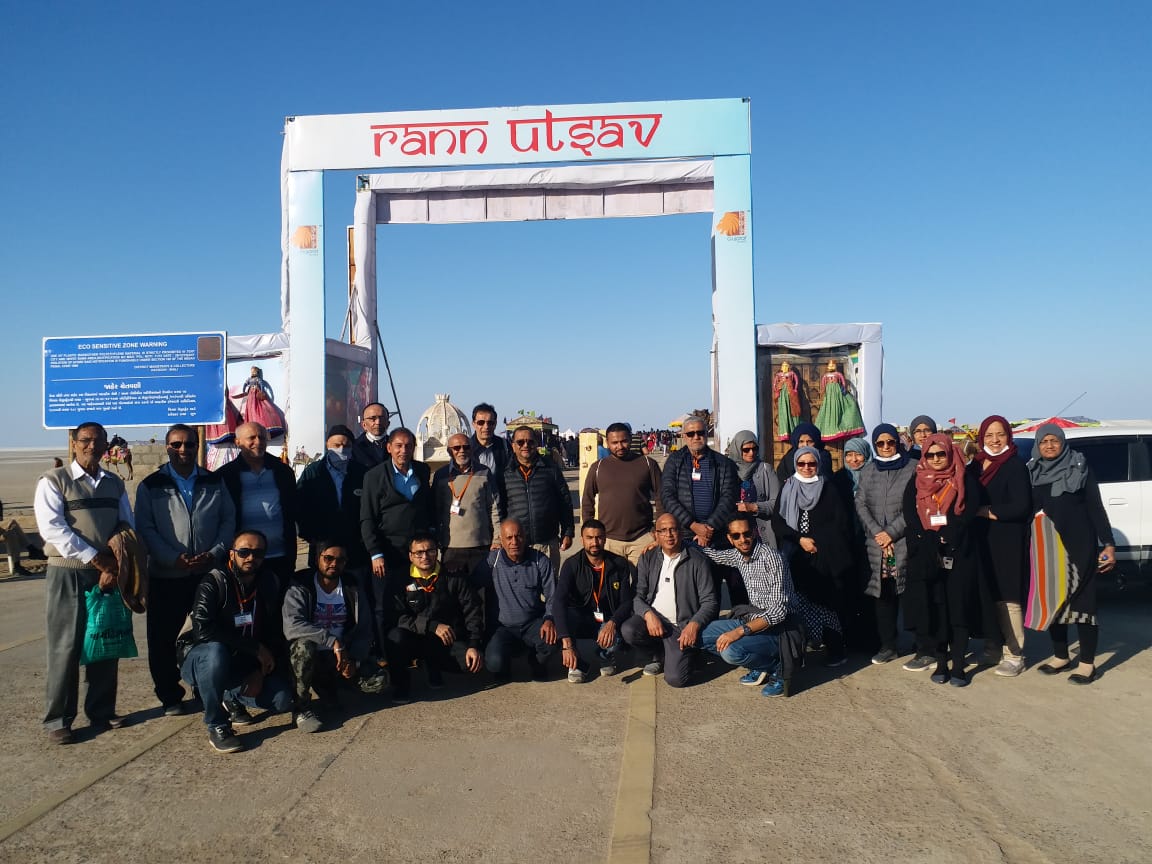 The Journey from Kandla to Bhuj

After an hour long flight, we finally reached Kandla in Gujarat. We then quickly rode a bus which got us to our hotel in Bhuj. Following a short period of time where we settled into our hotel, we then made our way to Bhuj Jamaat, who celebrated our attendance by giving us a rose presented by the Bhuj Jamaat president, Aziz Bhai Kothari and the Kutch Federation President, Mr. Rajab Bhai. Our niyaz consisted of sumptuous vegetarian food prepared by the school children

Our morning started at the historic Peer Ghulam Ali Shah Dargah. The speech by Rajabali Bhai chronologically etched out the life of Peer Ali Shah and his journey towards faith. The history session ended with questions asked by our members where the participants were provided with more information about the early rituals. After Zohr Namaaz we had lunch as invited guests at the residence of Rajab Bhai whose hospitality was outstanding.

After lunch we headed towards the famous Mandvi ship-building site. It was incredible to think that our ancestors who had set sail for East-Africa has constructed their ships and set sail from here. We were given a very detailed story about the construction of a ship by the head engineer. We got access to the entire ship, something which was not open to the general public.

We ended the day by watching a heartwarming sun set into the distance. It was such an incredible experience, laying back in the golden sand whilst seeing day turn into night. All participants enjoyed a camel ride on cold sand followed by a motorbike ride. We ate at the Boarding School of orphanage kids. As usual, the hospitality was at its best, and following dinner we were given the chance to talk to the orphanage kids where we gave them a few career tips about further education.

Visiting a historical museum is always an informative experience. We reached the Kutch museum late in the morning. We were surrounded by a gallery of artefacts and pictures of the Kutch historic era. I vividly remember an infographic which explained the history of Kutch aptly. A one-hour self-guided journey through the museum ended with a group photo at the famous ‘Hàideri Tope’ (an historical weapon) which was exchanged by the famous King Tipu Sultan of Karnataka in return for the horses of Kutch. We noticed a famous quote related to our 1st Imam Amirul Momineen Àli ìbn Talib a.s “La Fatah Ila Ali La Saif Illa Zulfiqar” carved in Arabic just at the neck of the ammunition. After the museum tour ended, we headed for our prayers followed by a very tasty vegetarian thali.

Walking around the Salt Lake

After lunch we headed to the outskirts of the Salt Lake. From here we could take a 1 km camel ride to reach the saline reservoir. From a distance, the Salt Lake resembles a snow-capped mountain. After taking in the spectacular view, we were once again blessed to see the sunset, this time on camelback. As we reached the hotel, after prayers we were welcomed with a massive king-sized vegetable thali which comprised of tantalising delights. The food was so fresh, pure and tempting that we could not resist overeating!

Venturing out to Amreli Jamaat

After a long seven-hour journey, we got off the bus and had a sàlat break for namaz è Zohrain followed by some ice cream to cool us down, courtesy of Dr. Hasnain Walji. After this we headed towards the Kabrastan where Marhum Edalji Dhanji Kaba was buried. We recited Surah Fàteha for this revolutionary personality who had a major impact in our ancestral history. Our journey to Amreli’ would have not been possible without the support of Shaukatali and Haiderali Kaba. We ended the day by travelling towards Bhavnagar, which was three hours away. We were going to reside at a plush hotel with beautiful interiors.

Meeting the inspirational students of the Mahdi School – Bhavnagar

The next morning, we were greeted with an incredibly warm welcome right at the entrance of the Mahdi school by the students. We were then taken to an auditorium full of students waiting to meet us. Following a Dua, the topic of the talk was about the harms of the extensive use of social media. The zeal of the students and the confidence in their portrayal of the message was exemplary. The next item was a hugely impressive play titled ‘If Mahatma Gandhi was Alive Today’. The show continued with a show from the twinkling stars from the kindergarten. It was amazing to see the talent harboured by some of the youngsters from our Khoja community.

Our afternoon was spent at the Umme Kulsum Trust office where we were given a speech delivered by the Chairlady Ms. Parveen. The speech gave a detailed view of the activities carried out by this organisation. These included the running of the Old Age Home, the Madrasah Class and the Orphanage. Following a sumptuous lunch, we got a tour of the different buildings under the auspices of the charity. We started with old age home where we interacted with the elderly citizens who had none of their family left to take care of themselves. Their optimism despite their circumstances was incredible. Our second visit was at a place where many girls were taught Islamic studies by an Alimah in the Arabic and Persian languages. It was humbling to see the volunteers who would help at these centres. Their dedication to serving the people of their community was truly amazing.

Later that evening, we went to the Bhavnagar Kabrastan where we had a Manqabat program. We were blessed to hear many reciters from various surrounding villages who has specially come to recite for us. Following this, we had a small discussion based on the life of Marhum Allama Haji Naji by Shaykh Kumail Rajani. The insight into his life journey was fascinating, as we learnt about his sacrifice and dedication towards the community through his tableegh efforts and his writing almost 400 books, the benefits of which are still reaped today. The day ended with a tasty buffet hosted by Bhavnagar Jamaat in a lavish farmhouse.

Taking part in the Khoja Symposium at Ahmedabad Sarkhej Jamaat

After packing our bags, we had our lunch consisted of burgers and cola drinks from McDonalds, which was a total, but welcome, change in cuisine from thalis and buffets which we had been having so far. In the evening we headed to Sarkhej Jamaat where the Khoja Symposium was scheduled to run. The Symposium started with a welcome speech by Brother Aliraza Khunt who also described our Khoja history from its medieval roots for the Gujarati audience. This symposium was continued by Shaykh Kumail Rajani and Dr. Hasnain Walji who discussed the Satpanth history in-depth for other English audiences. The symposium ended with a Gala Dinner hosted by Ahmedabad Sarkhej Jamaat.

Focusing on the life of Pirana Imam Shah Dargah – Ahmedabad

The discussions which occurred at the Khoja symposium were brought to life by a visit to the site of Pirana Imam Shah Dargah. We got an excellent opportunity to have a virtual experience of the medieval period by visiting the graves of Peer saheb. An entire history of the Satpanths and their old traditions were explained in detail by the local guide. A distinctive comparison was made and explained by the guide about Neeshkalanki who is the same person who we Ithna Asheris mention as 12th Imam Mahdi (atfs). At lunch, we celebrated the birthday of one of our participants whose name is “Mehboob Bhai Teja” who came on KHT for the second time. He was overwhelmed by this unexpected birthday cake cutting ceremony. He thanked everyone present for the celebration which made him feel like he was celebrating at home.

Finally, we reached the end of the Khoja Heritage Tour. It seemed that the curiosity and eagerness to connect with their lost history which was a unifier amongst all participants made them like a huge family. Every participant was requested to say a few words of appreciation and feedback about their experience in the whole 10 days’ trip. Each was delighted to respond with kind words of appreciation coupled with their favourite memory. Finally, the managing committee which organized the entire tour was thanked by all the participants. A wonderful and memorable trip came to an end.

The Khoja Heritage Tour is Back!

Call For Papers at the International Conference: “Intellect and Revelation: Relations and Ijtihadi Implications.”