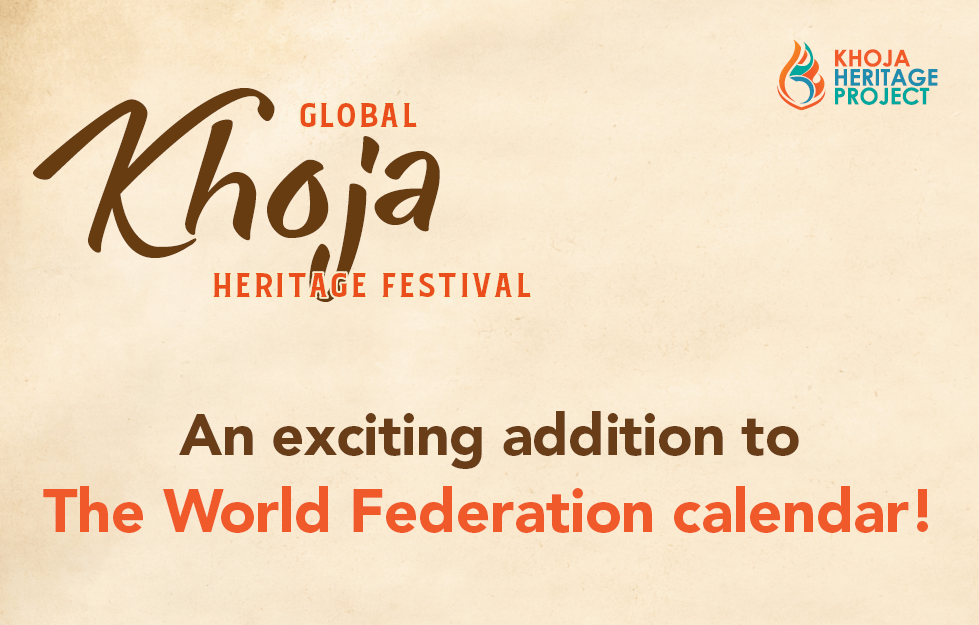 Heritage – a word oft-used but its importance, seldom fully understood. According to the definition from The United Nations Education, Scientific and Cultural Organization (UNESCO): “Heritage is our legacy from the past, what we live with today, and what we pass on to future generations. Our cultural and natural heritage are both irreplaceable sources of life and inspiration.”

Scholars in Islam have given great merit to communities uplifting and celebrating their culture within the remits of deen. Generation to generation, we pass on our cultural practices, customs, artistic expression and values; be it in the way we celebrate the wiladat of the Ahl al-Bayt (a) or commemorate the tragedy of Ashura.

As a Khoja Shia Ithna-Asheri Muslim Community, we possess in our heritage a rich story that deserves to be passed on and shared widely – a story of sacrifice, resilience and intense growth.

This festival was marked with great passion and creativity in jamaats across the globe in October & November. The Khoja Heritage Project curated several resources for the day, including a walkthrough exhibition, infographic on Khoja sports & spaces, a humorous skit (watch New York Jamaat’s well done skit here), video addresses and an abridged version of the Khoja Documentary. Jamaats were invited to tailor the itinerary and include their add-ons. These ranged from a two-day stunning family event in Karachi to Gujarati thalis in Nairobi and to Gujarati games in Wessex. Catch special moments in the different regions below:

In addition to the events held locally in jamaats, there was a worldwide livestream from The Mulla Asghar Memorial Library & Resource Centre in Toronto on Sunday 23rd October. This was hosted by Head of KHP – Dr Hasnain Walji, who was joined by The World Federation President, Alhaj Safder Jaffer and regional leaders (via recorded videos). An important segment was a conversation on the re-entrenching of the Gujarati language. The video can be watched on the links below:

To conclude the Khoja Heritage Festival for 2022, Dr Hasnain Walji remarked, “The first ever Khoja Heritage Day was a historical milestone, and I am very encouraged by the engagement of the Community at the events hosted by many jamaats around the world. The support by The WF and Regional Leaders has enabled the KHP to amplify the importance of our cultural heritage and appreciation of the struggles and sacrifices of our elders in making us who we are today. We hope that the next one will have even greater engagement by all Khoja jamaats around the world.”

The Khoja Heritage Project is delighted, Alhamdulillah, with the engagement from participating jamaats across the world on delivering an impressive celebration around our heritage, and thanks each volunteer who contributed towards its success. The bar has been set high for upcoming years and we pray that next year we are joined in honouring our heritage by more jamaats and with greater gusto, Inshallah!