Muharram amidst the pandemic has been a challenge for all of us. However, it presented an opportunity to prove to the world that the commemorations of Ashura and Arba’een cannot be stopped under any circumstances. Alhamdulillah, we are blessed to have access to online lectures at the tip of our fingers and it would be safe to say that most of us are spoilt for choice when it comes to English/Arabic/Farsi and Urdu resources. However, the same is not true for various other languages and especially Spanish being the world’s fourth most spoken language.

The World Federation’s External Tableegh department organised online Muharram activities for the Spanish community members in Spain and the Latin American countries to meet their needs of Tableegh in their native language. For this purpose, 55 videos were produced during the months of Muharram and Safar, one video being broadcasted daily. 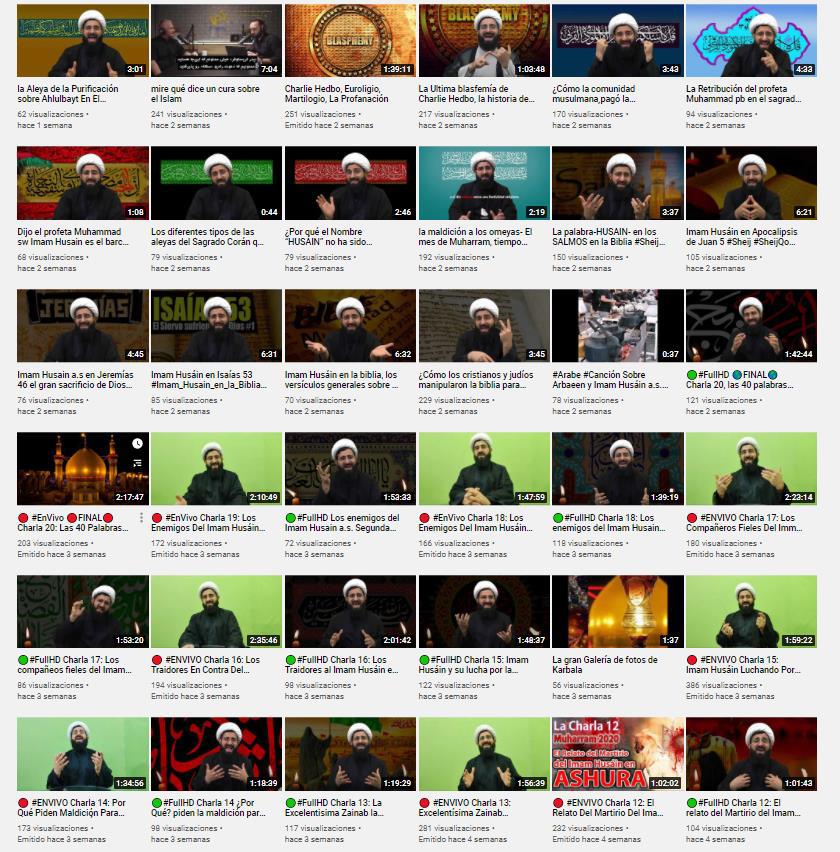 The objectives of these videos were:

The speakers for these videos were:

The topics were chosen according to the understanding and needs of the local Spanish-speaking communities worldwide and the subject matter of the videos revolved around Muharram, Imam Husayn (as) and his sacrifice in Karbala. Some of the topics covered in these videos are:

Start of the Muslim’s Lunar New Year with grief and mourning.

3. Imam Husayn (as) in the famous Sunni sources and the Sunnah of Prophet Muhammad (saw)

4. Imam Husayn (as) at the CHIITAS SHIAS Fountains

5. Mourning for Imam Husayn (as) by the last Prophet Muhammad (saw)

6. The reward of the one who laments for Imam Husayn (as)

7. Benefits and great rewards for the visitors of Imam Husayn (as)’s holy shrine and the bounties of the Land of Karbala

8. Imam Husayn (as) and the revolution of Imam Mahdi (atfs)

9. Tasuaa Day – His Excellency Hadhrat Abbas (as), The Hero of Karbala

10. The Night before Ashura: A decisive night for all of us

11. The Account of the martyrdom of Imam Husayn (as) on the day of Ashura

12. His Excellency Lady Zainab (sa), Sister of Imam Husayn (as)

13. Why are we asking a curse for the enemies of Imam Husayn (as)?

14. Imam Husayn (as) and fight for Social Justice

15. The traitors against Imam Husayn (as) in Karbala

16. The faithful companions of Imam Husayn (as)

20. The main purpose of Imam Husayn (as) uprising

21. The importance of the leadership of Imam Sajjad (AS) after the event of Ashura

22. Imam Sajjad (as) – the one who disrupted the plans of Yazid

23. Lady Zainab (sa) the Messenger of Karbala and a role model to follow

24. The lessons and messages of the Ashura movement

These videos were broadcasted in more than 20 Latin American countries, including:

The adverts for these video broadcasts were done through social media pages and they received overwhelming responses from the Spanish communities with over 8100 total views and more than 400 comments. The masses were very appreciative of these programmes rarely available in the Spanish language. Some of the comments that we received:

“Although I knew the meaning of the month of Muharram, I had never heard stories in Spanish, only what I had researched and read … thank you very much”
– Mila Komaiha

“Ya Aba Abdullah Ya Abbas Ya Allah. Thank you very much Shaykh. These narrations in Spanish were needed, thanks for explaining to us about the name Umm Albanin”
– Zehra Lee

“Salam. I am from Ceuta Spain. Today I have listened to him with my children. It is very constructive. We appreciate the effort and dedication. Maajuor”
– Khalid Ben Jouda

“What a wonderful presentation. Worthy of honour to our hero of God’s justice, Imam Husayn (as) Peace be upon Him”
– Espada Sagrada Zulfikar